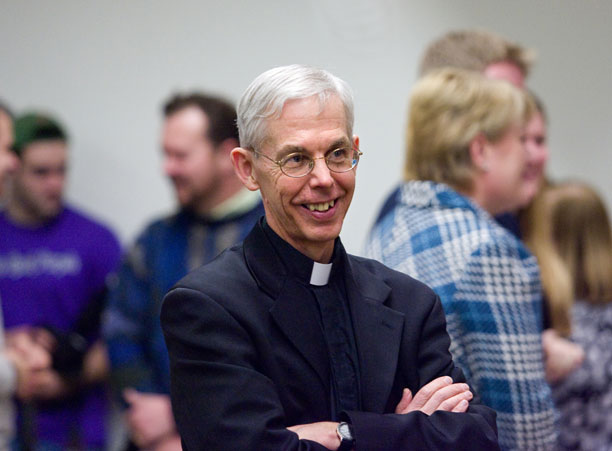 Posted at 18:49h in News & Updates by Colleen Mudlaff

The Gregorian University Foundation Board announced Tuesday, September 17 that it has chosen Fr Michael McFarland SJ to be the Foundation’s next President with his term beginning on January 1, 2020.   He succeeds Fr Alan Fogarty, SJ who has served as President since 2014.

Fr Fogarty has been instrumental in developing and enhancing key relationships at all levels in Rome for the GUF.  These efforts led to Pope Francis personally granting him permission for the GUF establish the Pope Francis Scholarship Program for current students as well as the Pope Francis Endowment to support future scholarships.  In addition to Fr Fogarty’s work with benefactors from all over the globe, he increased technological advances which included launching a new website, an e-Newsletter and several social media venues.  He knows how important it is to keep alumni and supporters from all over well informed.  Fr McFarland shared, “the board and I are very grateful to Fr Fogarty for his devoted service over the last six years and look forward to building on what he has accomplished.”

From 2000 to 2012 Fr McFarland was President of the College of the Holy Cross and oversaw a capital campaign which concluded in 2006 and raised $216 million for strategic priorities ranging from securing additional resources for financial aid to establishing new faculty positions.  Since 2013 he has served as the Treasurer for the Northeast Province of the Society of Jesus, which is based in New York City.

Upon receiving the news of his selection, Fr McFarland said, “I am happy and honored to accept this assignment because it is such an important work of the Society of Jesus.

When asked about his new mission, Fr McFarland said, “the Gregorian and its sister institutions, the Pontifical Biblical Institute and the Pontifical Oriental Institute, play an essential role in educating and forming the leadership of the global Church.  Their graduates, clergy and lay, become ministers, teachers and administers throughout the Church and in many other institutions and many end up in the highest ranks for church leadership.  A large number of the students now come from the developing world, where the Church is young, vigorous and growing, but faces severe challenges from poverty, persecution and injustice.  The universities do this great work on an impossibly tight budget.  They need our support to provide the highest quality education to the neediest, most deserving students and to provide the Church with the outstanding, in depth scholarship it needs to be a significant healing and redeeming force in this troubled world of ours.”