Crime and Punishment in Catholic Canon Law:
Updating the Pursuit of Justice

Join us for a lecture by
Pontifical Gregorian University Alumnus

Robert J. Geisinger, SJ, is promoter of justice at the Vatican’s Dicastery (formerly Congregation) for the Doctrine of the Faith, named to the post by Pope Francis in 2014. He began his practice in canon law in 1994 as associate chancellor of the Archdiocese of Chicago, where he also was a judge on the metropolitan tribunal. Later he was assistant procurator general (1999-2001) and then procurator general of the Society of Jesus (2001-2014), serving as the chief canon lawyer for the Jesuit order.  Since 1999 he has taught canon law at the Pontifical Gregorian University in Rome, where he earlier received his licentiate and doctorate. He also teaches at the Pontifical Oriental Institute.  In 2014 Pope Francis named him a consultor to the Dicastery for Institutes of Consecrated Life and Societies of Apostolic Life. He was ordained a priest in 1991. 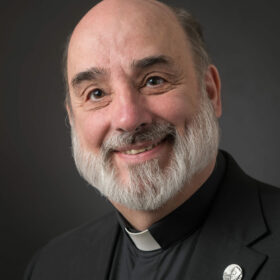 A recording of the lecture can be viewed below.