Jelson was born on January 22, 1984 in the city of Buenguela in Angola on the southwest coast of Africa. Although it is a small place the bishop of his diocese was created a cardinal by Pope Francis on October 5, 2019. At the age of 16 Jelson entered the congregation of the Poor Servants of the Divine Providence which is active in Angola. That is also where he studied philosophy and theology and was ordained to the priesthood in 2014. 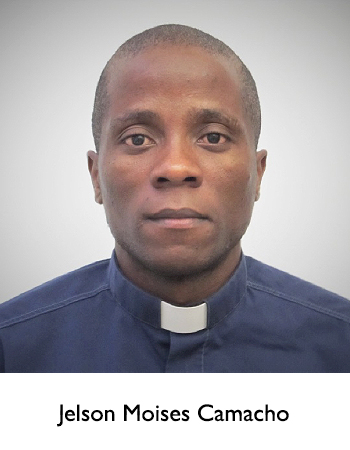 After ordination, Jelson was sent to Kenya where he lived with other members of his religious community and worked with the poor for three years. He then joined a community which lives in a poor and very difficult area on the edges of the city of Rome. His community is hard pressed to provide even the necessities for its members, including books. At the Gregorian Jelson is studying Biblical Theology. He is in the second and final year of work toward a Licentiate degree which he hopes to obtain in 2020. He says that he especially likes the quality of his studies and the fact that the professors are always willing to help out the students. He mentioned in particular Fr. Scott Brodeur, SJ, from the Northeast Province of the United States.

When he finishes his degree at the Gregorian University Jelson believes that he will return either to Angola or Kenya. He will probably be asked to teach in a seminary preparing other young priests in his area of expertise and sharing all that he has learned in Rome. He says that at the moment he is open to anything. In addition to his native Portuguese Jelson speaks some English from his time in Kenya and Italian which he has learned in Rome. He should be a great asset to any program or ministry which he undertakes. He asked me to emphasize that because of the circumstances of his community he would not be able to study at all if it were not for the generosity of donors to the Gregorian scholarship fund.